Weight Loss is a Side Effect of Good Health! 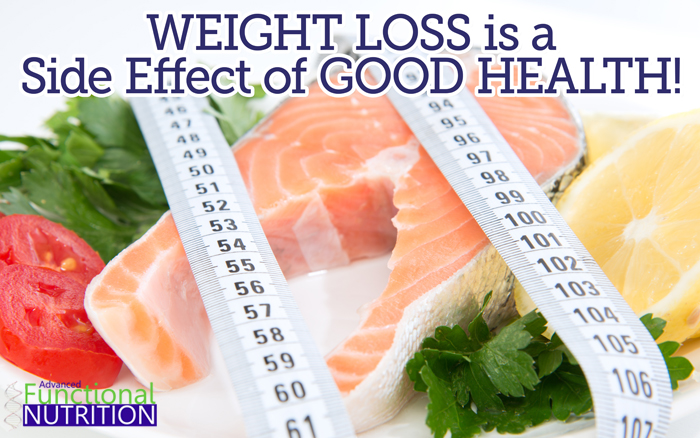 The science of Success… Learn the truth about fat!

If you have ever had trouble losing weight..it’s not your fault! As much as we want to point fingers and think that someone who is overweight or obese is at fault for their condition, believe it or not, this is more a result of the sneakily engineered, addictive food supply (lowered fat and added sugar!) and poor advice from a food pyramid that suggests that we eat carbohydrates (bread, cereal, sodas and juices, etc) as the highest proportion of our daily diets. This is taking advantage of a majority of the population who are insulin resistant (carbohydrate intolerant) and leading to weight gain and unprecedented levels of inflammatory metabolic disease, such as Type II diabetes, heart disease and high blood pressure. It is the consumption of an excess of carbohydrates, in addition to high levels of unhealthy plant oils (soy, corn, etc.) in the diet, which leads to unwanted fat storage, high levels of “bad” cholesterol, inflammatory disease and weight gain. Carbohydrates, especially sugar, are highly addictive and are hidden in most processed foods (i.e., Low Fat = High Sugar!). This excess is the primary factor which has led us to where we are today, with the prediction that over 50% of the US population will be diabetic or pre-diabetic by the year 2020!

News flash – Genetics loads the gun — Environment pulls the trigger. We are all born with our predisposition for insulin resistance! It is a matter of our genetics, and is exacerbated by a high carb lifestyle and gets worse as we age. Insulin resistance is not the disease — the metabolic disease is caused by a lifestyle, primarily our diets, which are not accommodated by our genetics. Even if you are thin and exercise frequently you can still be severely insulin resistant and have metabolic dysfunction, or what is termed Metabolic Syndrome (which includes the risk factors for related conditions such as high blood pressure, elevated blood sugar and cholesterol, abnormal deposits and distribution of fats in the arteries, insulin resistance, high levels of inflammation, and increased blood clotting tendencies). Obesity raises the risk for developing Metabolic Syndrome. But, it is important to understand that we (adults, adolescents and children) do not have to be victims of our genetic tendencies. What we need is some correct guidance to make better choices and a tiny bit of willpower to make the change – and starvation is NOT one of the healthy choices. 🙂 There is a solution for you and your family.

Obesity, the excessive growth of fat tissue and accumulation of abdominal fat, results from the combined effects of eating foods that our bodies are not equipped to deal with. Excess sugar and simple carbohydrates are the primary cause of fat storage. As already stated, the majority of us are insulin resistant, a condition characterized by the inability of insulin to produce its intended action – it’s a genetic pre-disposition in an estimated 70-80% of all of us: man, woman and child.   Additionally, oils extracted from grain and seeds easily oxidize in our bodies to cause inflammation. This combination of high carbs and wrong oils are the primary contributors to promoting metabolic disease and obesity.   Obesity is known to be further heightened by our underlying risk factors for cardiovascular disease and Type II diabetes. Financially, it is well-recognized that obesity entails social as well as medical costs. Consequently, re-establishing the dietary habits our bodies were evolved to use as fuel is of increasing importance. Our health and self-esteem depend upon it.

What we can do about it?

One key factor which must be understood is that it is our consumption of carbohydrates that subsequently convert into triglycerides (the fats we measure in the blood) which ultimately get stored as fat, and raises our “bad” kinds of LDL cholesterol in the blood. This over-consumption of carbohydrates triggers a detrimental cascading effect on glucose and fat metabolism, leading to increased levels of glucose and free fatty acids (FFAs) in blood, and resulting in toxicity from elevated glucose and fats. Also, research clearly shows that while we need to consume proper levels of healthy fats, many of the oils that we eat are pro-inflammatory, because they oxidize easily in our systems and fill our LDL cholesterol particles with oxidized, toxic fat. The combination of high carbohydrate consumption by those who are insulin resistant along with the use of these unhealthy oils eventually leads to abnormally high levels of oxidative free radicals or reactive oxygen species (ROS) — oxidative stress — a result of the damaging effects of high glucose and fatty acids. These excess free radicals can then damage our cellular structures and DNA.

Unfortunately, none of the available drug therapies comprehensively addresses the complexities arising from the causal factor which links inflammation/insulin resistance with obesity/hyperlipidemia. What is known is that a primary contributor to the Metabolic Syndrome is a high level of chronic oxidative stress (i.e., an imbalance of free radicals). Over the past two decades, chemicals derived from plants known as “phytochemicals” or “phytonutrients” have gained the interest of both the public and scientific communities for their role in maintaining health and preventing disease. Research has shown significant interest in a particular class of dietary phytonutrient called polyphenols, such as grape seed extract, red grape extract, EGCG, rutin, citrus bioflavonoids, resveratrol and quercetin. These have emerged as potential alternatives in healing complex conditions such as diabetes, elevated lipids (fats) and oxidative stress, all of which involve multiple signaling pathways which have gone awry and can be modulated by polyphenols.

Specifically, research has shown these compounds to assist in:

So what’s the bottom line?…

Obesity is an epidemic. We are being taught to eat a balance of foods that is not compatible with our human genetics — our caveman genetics which are tens of thousands of years old and beyond. The high carbohydrate diet is at the heart of the metabolic dysfunction that we term the Metabolic Syndrome, which includes obesity, cardiovascular disease, and high levels of unhealthy cholesterol (yes – high triglycerides and “bad” LDL cholesterol is primarily a result of carbohydrate intake). With an estimated 80% of us born genetically predisposed to insulin resistance, it is no wonder that our population is so overweight and sick — and this includes our children! We are not genetically capable to handle high loads of simple carbohydrates and we need healthy fats and oils in our diet (and, as we have stated, this fat does NOT include vegetable oil from seeds and grains — i.e., soy, corn, etc). And just because you are not overweight does not signify that you are not insulin resistant. You can exercise the extra fat away, but you cannot change the fact that a high carb/”wrong” fat diet will still challenge your insulin resistant genetics, produce excessive free radical damage (oxidative stress) and result in Type II diabetes and cardiovascular disease. Even elite athletes are succumbing to Type II Diabetes and cardiovascular disease due to years of extreme “carb loading,” once recommended as healthy for them.

Well informed, highly educated Nutritional Medicine doctors and PhD nutritional educators are gaining momentum around the world to help their patients ignore the high-carb/unhealthy oils food pyramid that we have all been “obediently” following, and to help them make these significant changes to their lifestyles. There is a great deal of scientific and medical evidence to support these recommendations, dating back to the late-1920s, most of which has been largely ignored or cast aside. Therefore, in addition to including moderate levels of exercise and methods such as stress management (meditation, love and laughter for example), dietary modification can do the most to help improve your health. These include: 1) a much lower carbohydrate diet; 2) the addition of healthy fats back into the diet — such as extra virgin coconut oil, avocados, butter and animal fats (preferably grass fed) and small amounts of extra virgin olive oil. These are oils that give our hormones a boost, feed our brains and do not oxidize to form toxic lipids in the body; and 3) adding powerful, protective phytonutrients to your diet (via low sugar fruits such as berries or taking a well-formulated supplement to avoid the sugar load).

So join the masses of people around the world who are waking up and making a change regarding what they feed themselves and their families…and getting their health and self-esteem back along the way. We all deserve it!

Results Our Customer Rely On

"Most of the time when I take supplements I usually don't feel anything. This Oprocyn product is amazing. I can breathe better really in minutes. My sinuses clear and I am on my way. Whatever it is, it works!!"